The first Shaky Beats festival just wrapped up last weekend and I think it’s safe to say that we should be expecting a Shaky Beast 2017 next year. The perfectly executed 3-day festival capitalized on the already existing infrastructure of the Shaky Knees music festival that takes place the weekend before at the same location, Centennial Olympic Park, in the heart of Atlanta, Georgia.

The prime location in downtown Atlanta provided a beautiful background to the Hip-Hop/EDM festival that featured headliners Major Lazer, Odesza, Big Gigantic, Nas, and Porter Robinson as well as surprise appearances by Big Boi, Waka Flaka Flame, and the Atlanta Falcons Drumline. The festival doesn’t provide camping so festivities end promptly at 11 p.m./10 p.m. but like most inner city festivals Shaky Beats had you covered with after parties featuring Cherub, Gallant, Marshmello and others to extend the party into the evening.

Rarely does a festival deliver so effectively in all aspects, but Shaky Beats managed to provide one of the best bangs for the buck in the industry. The highly accessible venue, efficient staff, and stunning festival grounds eliminated all stress and allowed the attendees to focus on having an unforgettable weekend.

The Shaky Beats festival took place at Centennial Olympic Park in the heart of downtown Atlanta, Georgia which was built for the 1996 Summer Olympics. The 21 acre park mostly consists of well maintained fields but it also features beautiful brick pathways, fountains, statues and an amphitheater that is perfect for music. The park was partly paid for by the donations of thousands of individuals who purchased engraved bricks for $35 a piece and those bricks provided the pavement for the food court this past weekend. Surrounding the festival were iconic Atlanta buildings and attractions with the CNN center, World of Coca-Cola, Sky View Ferris Wheel, Football Hall of Fame, and Phillips arena.

Food was provided by local Atlanta food trucks like The Atlanta Burger Truck, The Pickle Food Truck, and Box Bros BBQ which delivered plenty of variety and healthy alternatives. Camelback also had a filtered water station that dispensed filtered water quickly and kept everyone hydrated under the Atlanta sun.

There were two porta-potty locations with the bigger bunch by the PeachTree stage and another group that consisted of one solid line by the food court / Ponce De Leon Stage. My one gripe with the infrastructure comes from the line of porta pottys just behind the food court  because it cluttered a central pathway and didn’t provide enough porta-potties for the centralized location. The other porta-potty location however was stock-piled so this was also never an issue if you planned accordingly. 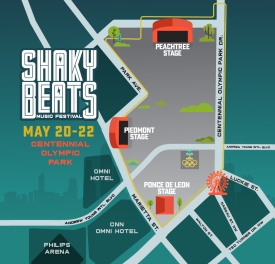 With 21 acres the three stages were spaced far enough apart to eliminate most sound bleed. The exception was directly between the two main stages (PeachTree & Piedmont), but if you were stuck in this zone it was only to find shade or sit under a statue so it wasn’t an issue. The stages never feel too crowded or cramped mostly due to the large and open infastructure of the festival but this is great news for festival attendees.

The PeachTree stage was the main stage of Shaky Beats and it packed the biggest punch accordingly. This was the only stage that provided screens on either side of the stage to showcase the talent, but it’s also the only stage that drew crowds large enough to need it. The production crew particularly wowed me by capturing momentary crowd interactions and really creative camera angles like my favorite shot from straight above Dominic Lalli of Big Gigantic that showcased all of his gear during the performance.

This stage provided VIP viewing to the front-right of the stage and a VIP only bar close by for quick mid-performance refills. There was also a set of extended VIP viewing that provided two floors for elevated observation. The first floor features lounge type seating with a roof for shade during the sunny sets and the second floor had balcony to overlook the Peachtree stage and the massive crowd for the best view of the festival. 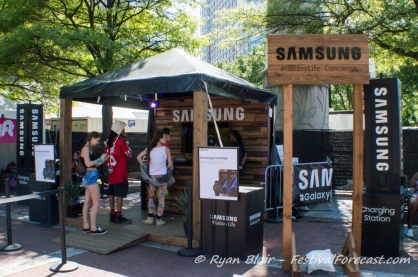 There was one more exclusive viewing area at the Peachtree that was for Samsung Galaxy owners only. The Samsung booth hooked Galaxy owners up with the ultimate festival swag bag. Included in the Galaxy drawstring bag was branded clothing with a hat, tank-top, bandanna, cloth towel, a portable phone charger, a $15 voucher for official Shaky Beats merchandise, and two wristbands to their viewing station at the main stage.

Admittedly, I only wanted access to the prime viewing area 100 feet directly out from the main stage, so I was suckered into a line at the Samsung booth, but I was ecstatic when I left. If you are a Galaxy owner and you see the Samsung booth at your festival, don’t skip the opportunity for the ultimate set of freebies.

I promise you I’m not paid to write about this, but the freebies were that good because the tank provided me a dry shirt when mine inevitably soaked with sweat. The towel helped me wipe it the sweat from my face, the charger provided extra life to my phone, the voucher made merchandise affordable, and the hat shaded me from direct sunlight which helped me see the stage better. They nailed it and because of it there were several points throughout the day that I became a walking billboard for Samsung, but I was happy with it because it was gear that any festival attendee could have effectively utilized. 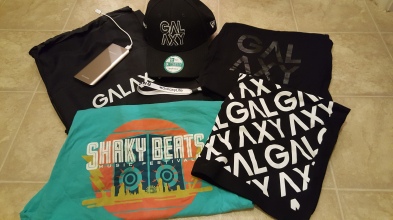 This was the second biggest stage at Shaky Beats but it still managed to provide a powerful punch and it drew massive crowds with performing artists Chromeo, Mo, Marshmello, Carnage, and Nghtmre. This stage doesn’t come equipped with extra screens to showcase the artist, but it did provide a giant LED backdrop to blast the audience with visuals. At times the crowds grew large, but they never felt crowded with plenty of wide open space. Many people found comfort in the naturally shady setting provided around the edges and they utilized for meeting locations and staying out of the direct sunlight. This stage also featured a VIP viewing section at the front right of the stage. 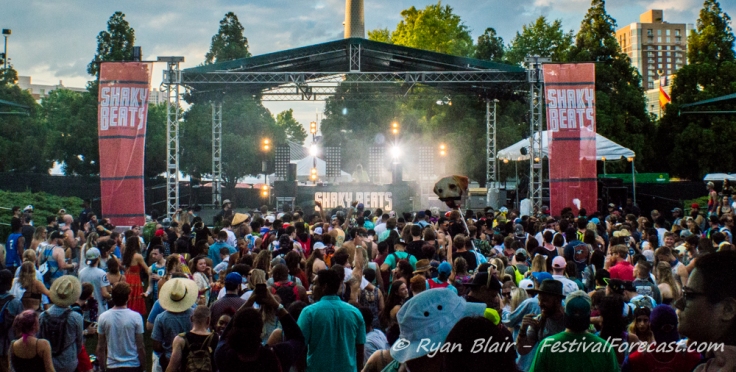 The third and final stage was considerably smaller than the first two and it was tucked into the corner behind the food court. As the smallest of the stages it lacked most of the glitz and glamour that comes with a show, but in exchange fans received a much more personal experience.

There were no screens or LED backdrops, just a simple lighting rig setup behind the DJ’s playing at Ponce De Leon. This stage was part of the mini amphitheater at Centennial Olympic Park which was circled with concrete steps and canopies to provide much needed shade. The “Pit” of the theater was an open square that made for intimate dance parties and allowed attendees to get within 10-20 feet of their favorite artists.

Shaky Beats is an 18+ event and most attendees fall in the 18-25 range. The audience 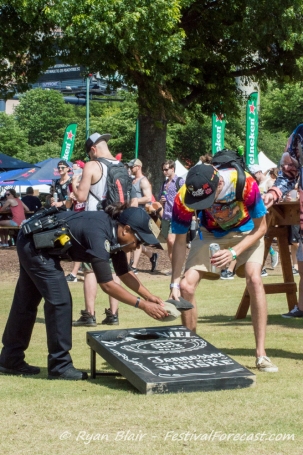 almost entirely consisted of young, energetic, and friendly fans of dance music but the power of music doesn’t discriminate and people of all ages were represented at Shaky Beats. There was a strong Atlanta presence in attendance and many of the locals I spoke to were quite excited for Shaky Beats first year.

There were only good spirits as far as the eye could see with positive interactions from everybody I encountered. The attendees were pumped to turn up all weekend but even with all that intense energy I never witnessed a single altercation. The police were some of the finest-most respectful I’ve encountered and they even took the time to play a game of bags because the positive attitudes made their job much easier throughout the weekend.

The music was a mix of hip-hop and electronic music that provided diversity throughout all the genres. Of the two days I attended, Saturday definitely stood out to me with some truly unforgettable performances. 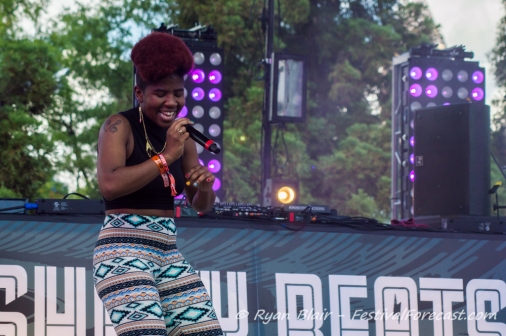 First there was the appropriately named Sassy Black who blasted the audience with her self produced beats and strong sassy opinions. There was a point when someone wondered into her early set wearing an Native American head-dress and they promptly left as her song was finishing up, but Catherine Harris-White didn’t waste the opportunity to have a teaching moment as she preached the importance of understanding cultures and how offensive the gesture was.

Kicking off Saturday on the main stage was Watch the Duck with the guitar wielding mascot. The three piece soulstep/trapstep trio based out of Atlanta consists of Eddie Smith III (Guitar/Duck), Jesse Rankins (Lead Vocals), and Jonathan Wells (Keys/DJ) provide a unique presentation for a dance party. Smith is quoted saying their name derives from a saying; “Everybody sees the duck traveling smoothly on top of the water, but nobody sees it kicking hard as hell under it, struggling to stay afloat.”

Tory Lanez left everything on the line in Atlanta with a performance that commanded attention. His energy flowed freely and overwhelmed the audience with passion. He crowd surfed and performed with the crowd holding him up by his feet, but the true highlight came when he climbed 20 feet up a light pole to finish out his song and deliver a speech about how he started with nothing and now he’s on top of the world.

Following Tory Lanez on the Piedmont stage was the infamous masked DJ Marshmello who drew one of the biggest audiences to the side stage. He played a hip-hop infused set and brought out Atlanta native Waka Flaka Flame to surprise the audience.

alongside her most loyal fans. Trippy Turtle, Porter Robinson, and Chromeo all provided strong performances but the evening was really solidified with Odesza closing it out on the mainstage. The Atlanta Falcons drumline made a guest appearance to play alongside the duo and the night was closed out with a fire works showcase.

Sunday showcased some strong electronic artists with Georgia native Nugz Bunny staring the afternoon off with an impressive performance that had the crowd head banging at 3 o’clock followed by J Proppa, Nghtmre, Yellow Claw, HXV, and Carnage.

However Sunday was all about hip-hop from the Northeast with AER from Boston, A$AP Ferg from Harlem and Nas from Brooklyn. Aer brought a live band from Boston while A$AP Ferg delivered a more modern performance, but it was ten time Grammy nominated Nas that stole the show with his inspirational lyrics

Big Gigantic closed Shaky Beats out right with nearly two full hours of hip-hop inspired beats and funky sax melodies. The electronic duo from Boulder, Colorado consists of Dominic Lalli and Jeremy Salken but they also got help from an Atlanta native with a guest appearance by Big Boi who performed just two days earlier at Hangout Festival in Gulf Shores, Alabama with Big Grams. Big Gigantic didn’t stop there and the night got even bigger with a closing collaboration with Carnage.

Shaky Beats was a very successful experiment that took place in downtown Atlanta and it paid off. The Hip-Hop and EDM festival is meant to reach a different audience while utilizing infrastructure already in place from indie rock festival Shaky Knees at Centennial Olympic Park the weekend before. The easy accessibility of the beautiful park eased much of the trouble with attending an inner city festival and a friendly and efficient staff eliminated the expected nagging lines. Shaky Beats focused on the music with a top notch lineup for an extremely affordable price, but they went above and beyond by reaching out to Atlanta super stars to bring some home town hospitality to a new Atlanta tradition.